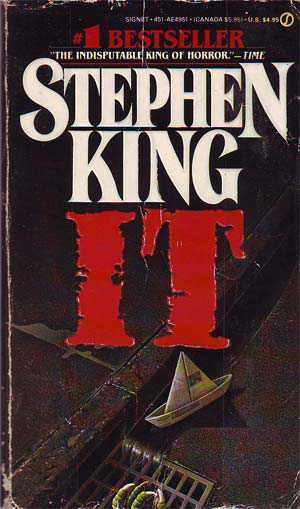 What’s the laziest job in the world? Being an editor for Stephen King…

I’ve tried to get into Stephen King on a few occasions. It has not gone well on all the occasions I have done it. But you cannot help but be sucked in to the massive gravity well that is Stephen King’s notoriety, and with so many people praising him, one is compelled to doubt one’s own opinions. After all, can literally thousands of people be mistaken about the skill of this writer?

Yes, yes they can.

It is the story of a group of friends who fought a force of evil in their childhood, only to reunite twenty-seven years later to fight the same evil once again. The story breaks away from a more typical good vs evil narrative by giving you an abundance of details about the crummy little lives the characters had in the past, and making you wonder if being eaten by a killed clown/cosmic creature from some beyond truly is such a bad fate after all. The meat and potatoes of the story is well crafted enough, and the juxtaposition of unrealistic childhood fears of bogeymen and monsters vs the tangible threats of parents, peers, neurosis, racism and the terrors of a small town community living are interesting enough. The problem then becomes that it is King who is putting the story together.

But I can’t emphasize enough that what Stephen King needs most of all is a heavy-handed editor. King is a competent enough writer on his own, but he seemingly constantly over stretches his goal by giving you far, far too much. Enough to make people wonder if he was paid by the word. Perhaps some find it a virtue that you are given the backstory of characters that only show up in the novel once or twice, but for me that is going too far. This is particularly striking when one considers that some of the central characters are utterly forgettable. I have no idea what Stan’s characteristics were like, either as a child or from what little we saw of him as an adult. But a minor character who existed only to have a homoerotic moment with a minor character and then ultimately be killed by It had a vivid backstory that stuck with me. It is the kind of imbalance that threw me off, and it happened far too much.

Rather famously, the story has an elephant in the room in the form of a child sex scene. As someone who has been through the grinder of odd sex in stories, I wasn’t particularly bothered by a scene of child sex. It was mostly just unnecessary, and poorly executed. I now no longer recall if King added some poor story hand waving to explain why this nonsense happened, but if it did I don’t recall. And just to be pedantic, I would like to clarify that the sex scene was not an orgy. It was a train. Get your facts straight.