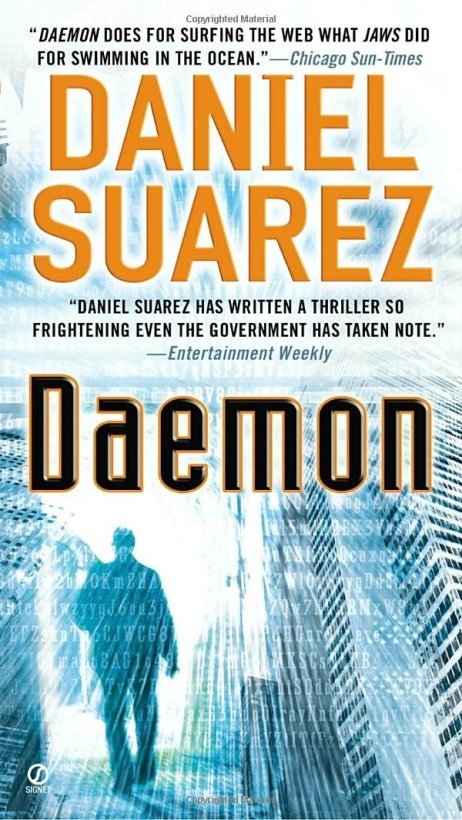 I started the road into being a voracious reader with science-fiction. That is, science-fiction is the genre through which I learned that the page count of a book was irrelevant if the book was good enough, and I attacked book after book in the genre, never with a concern to length. Science-fiction was very important to me, and I am very happy to see that over the past few years it has become increasingly more popular.

Daemon is not science-fiction, but that’s only because it was written in 2009. Had it been written even five years earlier, it would have entered the canon. It follows the story of criminal justice teams tasked on bringing down the titular Daemon, a computer program carrying out a series of commands based on what is happening in the world around it, leading to often violent and often mysterious results.

Their are no spoilers in saying that the Daemon, which was created by a video game tycoon, is the antagonist of the novel (this is in fact it is the selling point of the book). This is where my ramble about science-fiction at the beginning comes in. Some years ago this premise alone would have been enough to push it into the cannon. But in 2018, where captains of industry and noble prize winning academics talk sincerely of the threat of AI global dominance, this much more muted story of a manipulative and homicidal algorithm seems perfectly plausible. The story seemingly pushes against the science-fiction threshold as it progresses, but not in a way to jolt a reader of mundane fiction into science-fiction, but to generally remind readers that these distinctions exist loosely at best.

Which is a delight to watch unfold as you are reading.

To do all this the book must tight-ropes the line of suspension of disbelief pretty precariously, and while reading it one wonders ultimately where the chips will fall. A lot was riding on how the book ultimately wrapped up, and I was pretty grateful at the halfway point to find that the book was staying on the rational side of the suspension of disbelief. It came very close to being an extremely unbelievable novel, but steered the course enough that I remained bought in to whatever was going on. Had it crossed that line, the novel would easily have fallen across the line and into the territory of science-fiction. This isn’t to say that science-fiction is by its nature bad, but it has a fantastical element that register to readers minds as events not yet possible.

Daemon’s straddling of this line firmly proves that the future really is now, and quickly distributing itself across all aspects and strata of our lives.