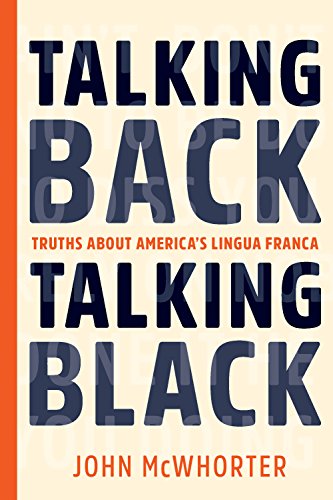 One would imagine that if ever there was a profession that attracted a certain liberal mindset, it would be being an ESL teacher (which is my day job). But this is false. In my time as an ESL teacher, I have discovered that the real qualifying factor is an inability to cut it back in your home country. A surprising amount of ESL teachers have a conservative streak, as I have found out from conversations where they have talked about their opinions about language. Their opinions often contradict the research on language and linguistics.

John McWhorter’s Talking Back, Talking Black is the opposite of such a conversation. In it, he examines the arguments against the status of “Black English” (as per McWhorter’s own labeling, but often called ‘African American Vernacular English’, or, as I heard as a child in the 90’s, Ebonics) as a proper functioning language, as opposed to merely being a flawed form of standard English. He takes a rather methodical approach to explaining why Black English should be considered a language on its own, and why the common retorts as to why it isn’t are false.

The reading of this book raises a completely separate issue; namely, what the hell is it that I claim to know about the subject. I don’t speak Black English, but I feel like just being an American it is somehow around me enough where some kind of opinion is justified. The book was helpful in demystifying that. Reading it, whenever I encountered one of the author’s points I realized that while I thought I could produce bits of the actual language, what I could at best do was parody. More importantly, I wasn’t paying enough attention to the language itself to notice whether these points were true or not. People normally do not applaud themselves at moments of ignorance, but it is here where I can again bring up those many much more conservative colleagues I have had over the years. Most Americans can parody Black English well enough that the parody is recognized, but this parodying is likley the extent of what the person actually knows.

Which is why I so frequently buy books like John McWhorter’s Talking Back, Talking Black. I have heard many arguments against Black English in my life, and I never found any of them to be particularly noteworthy. Largely, these conversations were emotional in nature. But I often did not have the ammunition to argue back against the peron to whom I was speaking.