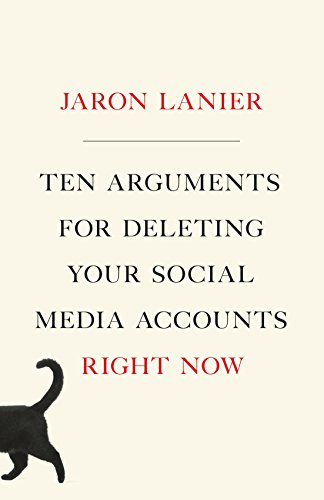 I frequent a coffee shop wherein I sit at a large table with many other people. Sometimes conversations ensue. On when evening I over-hearing some of the conversations when someone brought up a factoid about linguistics. Being a nosy so and so, I brought up the fact that in reality this factoid is largely false. Their rebuttal to me was nominating a meme that reinforced their point…

Sigh. I guess my education in languages doesn’t really matter in light of virality’s link to truth.

Jaron Lanier’s unwieldly titled Ten Arguments for Deleting your Social Media Accounts Right Now stipulates that the overall effect of social media is negative and, spoiler alert, we should delete our media accounts, even if just temporarily, to see if there is notable improvement in our lives. The book goes into the social, psychological and economic ways that social media is ruining our lives.

I find this book to be difficult to talk about. Part of the problem is that I am living the advice of this book backwards, in that I eliminated my social media presence years ago and I find myself now trying to get back on it for the purposes of acquiring that famed unicorn, ‘exposure’. I post these book reviews to WordPress, a social media of sorts (though perhaps more benign) and tweet about them on twitter, though as a sort of Luddite I do not know exactly what I am doing with Twitter.

But more troubling is what can be looked at as a large number of assertions the book makes. Don’t get me wrong, Lanier cites his sources and cites them well, but one can’t help but wonder to what extent all of this isn’t anecdotal. I began this review with an anecdote that happened the literal day before I began Lanier’s book, but these were the experiences that I would notice because (or so I though) I am just an ol’ curmudgeon. There is something of an Epistemlogical deficit for these larger claims of systemic problems.

But that is me just being needlessly skeptical. It is actually somewhat obvious that the points Lanier is making are correct, if for no other reason than the massive amounts of news stories hinting at the very phenomenon and the confessions of the very same social media network about the very same problems Lanier is speaking to. And maybe that is what we could expect people’s reaction to be to this book in general. A weaseling that its not really making much of a difference anyway. That of course is the pleading of the addicted. But Lanier’s argument is strong, and hopefully the book will be read by as many people as possible.