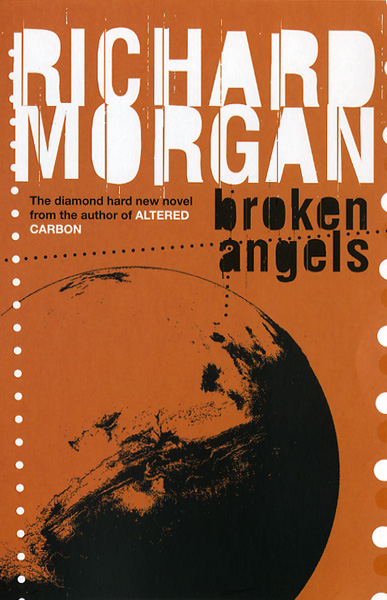 I am a dirty, dirty completionist. This is why I tell my friends that I absolutely refuse to watch either Doctor Who or Star Trek. You are right, I might enjoy it. But either way, there is far too much of it and enjoy it or not I will consume it all. So I had better not start.

These books by Richard K Morgan where a little easier in that I only had a trilogy to get through. That being said, I hope this ends soon.

Broken Angels is the second book in a trilogy following the exploits of Takeshi Kovacs. In this tale, Takeshi starts in a war… and gets hired by a person… to do a thing… there is a martian space ship involved…

I have absolutely no idea what this book is about.

A interesting comparison is to the series of Expanse novels by James Corey. While those books are boring me in similar ways each and every time I pick one up, I was a bit surprised to see this book going in a whole different direction. It promptly bored me in a new and yet still uninteresting way. I found it strange that book focused on a character that I never found myself caring about in the last novel while completely ignoring the conceit of the last novel, the only damn reason I picked it up in the first place.

This book bored my well beyond tears. My usual marker or needing to abandon a book is turning a page and realizing that I had no idea what was going on. Somewhere around the fifty percent point of the book, I realized that I didn’t actually know what the plot of this story was. It kept on being sidetracked by my own imagination, which unhelpfully would get sidetracked by all the much more interesting directions the author could take the story considering the premise the story is built upon.

In the previous book in this series there was a sex scene that I found enjoyable in how bad I thought it was. That’s something I didn’t think could be topped, until I read an equally bad sex scene in this book. I thought I had soldiered through it, and then this book gifted me with another gaudy sex scene. Maybe I am getting older, but then again I have read just about everything by Samuel R Delany, so my tolerances for sex should be pretty high. I think the sex scenes are just bad.

But the real pain is knowing that I am going to read the next one in the series too.

Please, stop me before I hurt myself again.