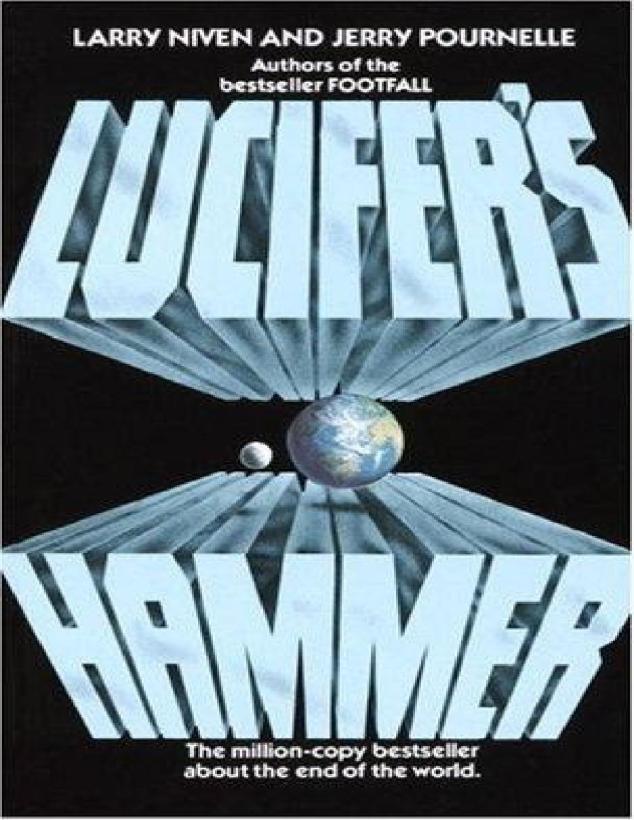 In my political trollings I often encounter those people more towards the libertarian side of the political spectrum who often have that horrible ‘self-reliance’ meme well ingrained into their head. They think that humans shouldn’t be like army ants, and that every person should be the seed of a new society, should we have to do it all again. These people are fools. Our world is specialized, and if we had to do it all again no one person could rebuild from scratch. I would hate to live in that world, and don’t even much enjoy imagining it. And yet, I loved this book.

Larry Niven and Jerry Pournelle’s Lucifer Hammer tells the tale of the last year of humanity before a global civilization killing comet slams into the Earth, as well as looking at the aftermath of the impact. It follows numerous characters, letting you see how very different people react first to the possibility and then to the consequences of this event. The choice of focusing this otherwise global story in the state of California allows for an interesting mix of different cultures and social classes to come together and aggregate, showing just how upside down society would become in this new world.

As you begin the book, you find it introducing character after character after character, making one wonder if there is anyway the story can tie them all together. As it turns, out, the book can, and it does so incredibly well. There are characters from very different walks of life, and thus one imagines that the shattering effects of a civilization ending threat would show of their different skills, but not really bring them together. Initially reading this, I wondered to what extent it was realistic that all these people’s lived ended up intertwined, particularly after such a disaster. But thinking about it further, it made sense. Humans are a social species, and we do strive to group together. It does make sense that they would huddle together so after a tragedy.

The book this ended up reminding me most of was Stephen King’s The Stand, a book I abandoned out of boredom some five or six year ago. Specifically, Lucifer’s Hammer had all the elements of a more secular apocalypse story, and thus had everything interesting about King’s story without any of the really boring garbage. For instance, while that book has an antagonist who is evil purely by fiat (he begins the story evil and we are never told why it is the case short of the non-answer ‘destiny!’), this book gives us several interesting and complex characters who, once they encounter and influence each other, lead each other down a rabbit hole of evil that is, due to your actually witnessing it. This makes their evil, and the their horrific actions, actually scary, thus giving the book very real stakes for the reader.

The shows us just how delicate our civilization is to an indifferent universe.

One thought on “Lucifer’s Hammer – Larry Niven and Jerry Pournelle”