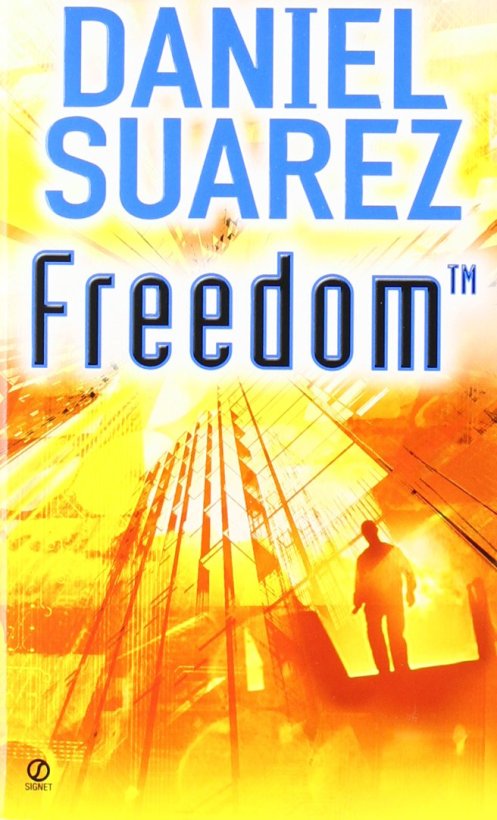 Here’s something weird: when I first got into this book I was initially disappointed to find it was a sequel to Daemon. I didn’t actually think that Daemon needed much of a sequel. Until it was given to me. Now I am heart-broken that it isn’t a trilogy. How is that for a compliment?

Freedom™ picks up right where Daemon left off, which means it is very hard to give you a synopsis without feeling like I am giving you massive spoilers as well. Many of the characters return, and many of the threads I hadn’t really thought of being all that loose at the conclusion of the novel now find themselves neatly tied. What I can say is that it explores notions of society and governance in fairly novel ways, while considering what exactly it would look like if the current power system were to be turned over.

If you’ve read the previous book and that synopsis above sounds confusing, then I’ve done my job correctly. Suarez really did something interesting with these two; he created a thematic gradient that travels so slightly from fiction to science-fiction that one hardly notices the transition at all. When one goes from the the first book to this one, there are moments where one encounters events that seem to be happening in some far future, although the story as a whole began in a world no different from our own. But the book has managed to do this in a way that is never jarring, even when things that are far out of our ordinary start to happen. The feeling is that in the world of that story, things are happening FAST, almost worryingly so.

Which isn’t to say that the book does not end up leaving us with a whole lot to ponder. With the shift in tone comes a shift in the perception of one of the major characters. As we continue to watch his vision crystallize into reality, one can’t help but reconsider his actions in a new light, just as a one of the main characters must. Shifts of this nature in a story can often be jarring if done poorly (this exactly once caused me to stop watching a movie half-way through, something i’ve only done a handful of times), but here it is done so seamlessly as for me to barely notice it had happened till I reflected on the book as a whole, well after my reading of it.

I am fairly sure there are still enough loose ends for a sequel to this to come about, and I have no doubt that that book will be hard on the science-fiction side of the spectrum. It will ask the really big questions, the ones that only science-fiction can bother asking with any kind of sincerity. I don’t know what kind of story it will be, but I will be in line to buy it with bells on.