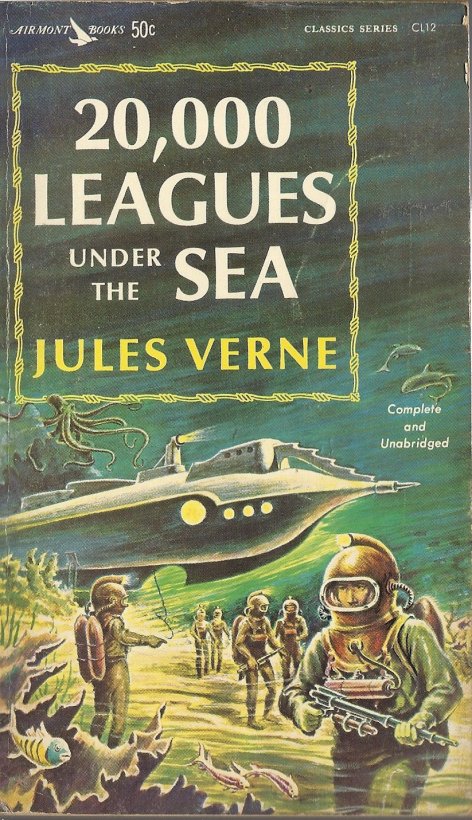 I am a terrible completionist. It has the bad effect of making all of my hobbies expensive and often impossible. It isn’t enough for me to just like science-fiction, I have to read as much of it as possible, working towards the impossible goal of reading all of it.

Jules Verne’s 20,000 Leagues under the Sea might be one of the most famous science-fiction novels ever written. It follows professor Aronnax, who while on a trip to study a mysterious sighting on the sea finds himself on-board of the first truly modern submarine. From there Aronnax follows captain Nemo and his crew from one adventure to another, exploring the oceans of the world as no person ever had before.

People who don’t understand what science-fiction is and are desperate to find something kind to say about this book will often give it a laurel it doesn’t deserve. They will call the book prophetic. The idea is that this book created the idea of a submarine before there were submarines. This is really stupid, and it shows that whomever is making this argument hasn’t really read the book. In the opening chapters, when people are discussing the first sightings of The Nautilus and trying to understand what it is, someone specifically suggests that it might be a submarine, but the idea is discredited because the Nautilus is too big to be a submarine. Jules Verne didn’t invent the submarine. In fact, there was one used (successfully) by the Confederates in the American Civil War (which was only a few years before this book was released, but still). Prophecy is neither a necessary or a sufficient quality of good science-fiction, and I wish people would stop thinking it so.

Here’s one tiny thing that made reading this massively rewarding. The book was also pretty interesting from a linguistics point of view. The book, as I mentioned earlier, is rather old. But as I began to read it, I noticed that the translation I was reading was also rather old. It was filled with words and phrases no longer used in exactly that way. The only example that comes readily to mind is the use of the verb to husband, which I am sure has not been used as a verb in a century or so. As a person who is passionate about languages, it was interesting to see just how notable linguistic change can be in the 150 years since this book was written.