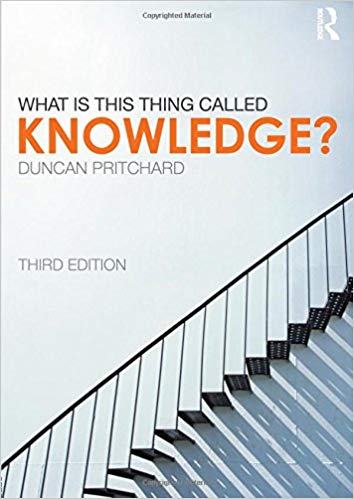 In the two years I’ve been at this blog there has been one type of book that I have been reading but that I have not reviewed. It’s textbooks. Granted, I’ve not read a whole lot of them, but I have read some (well, this makes three). It just doesn’t seem to make sense to review textbooks. A lot of what is meritorious about books doesn’t seem to really exists in text books. They are often so heavily distilled of style and personality in favor of clarity and ease of reading that I would be pretty easily convinced that all textbooks came from some kind of alternate dimension where a single immortal creature is writing them all. This is often what makes them pretty boring reads.

I am not ready to say this one is much different. It still does feel flat, and it still does seem to have a lot of personality steam-rolled right out of it. But in the case of this book, the nature of the topic made that somewhat necessary.

What is this thing called Knowledge is the book you might encounter at a low level college Epistemology class. In Philosophy, epistemology is the area of study that deals with what knowledge is, and how we can be sure to ever have knowledge. It is, in a respect, the most foundational question of all philosophy, and thus the most important. The book divides the topic into easily digestible subtopics, and brings up relevant debates and figures in the history of the subject without even overwhelming the reader – as many other textbooks do. And in true textbook fashion, it gives you study questions at the end of a chapter and a synopsis for those too lazy to bother reading it. When dealing with a topic like this, or fairly often with any philosophical topic, one is confronted with a lot of hypotheticals and abstractions. This book did better then average in terms of explaining the abstractions and giving you very easy to follow examples of the hypotheticals. This is pretty necessary if one is going to learn on what flimsy ground a lot of their beliefs are held. A little more difficult was dealing with all the jargon that such a topic comes with. Despite best efforts, that was still pretty hard to follow.

But largely the book made what could otherwise be a boring topic easy to work with. And I was pretty grateful that it did.

I can only imagine that someone’s dismissive reaction to reading  this might be “Well that’s well and good is this branch of Philosophy is your thing”, though I hope that is not the case. If you’ve been reading this blog with any kind of frequency then you have seen the word Epistemology come up fairly frequently. Maybe it hasn’t peaked your curiosity as much as mine, but I think it is one of the more powerful tools in understanding the world around us in the era of fake news.