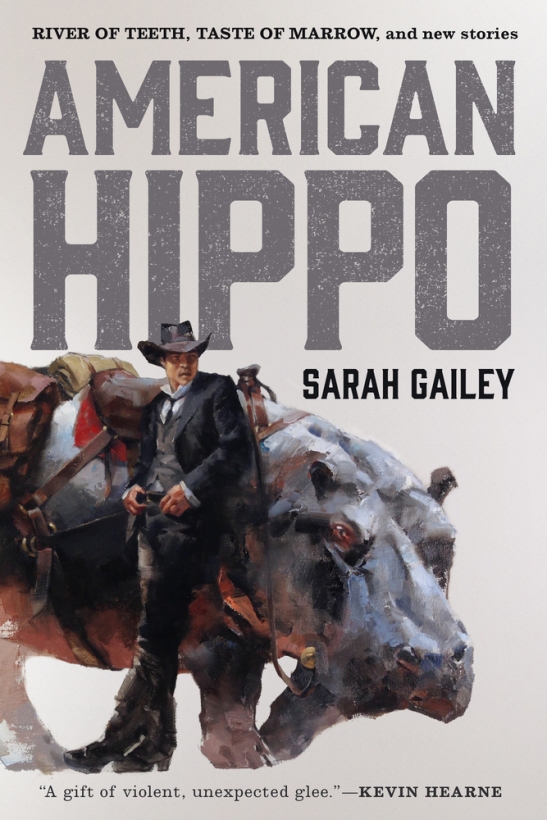 Anyone with an ambition to write has heard a certain piece of advice, the best of which was said by Vladimir Nabakov:

Style and Structure are the essence of a book; great ideas are hogwash.

I’m not going to disagree with that. My favorite novel of all time is seemingly about nothing (or at least, it is accused of being so fairly often), but it is an incredibly well written nothing. However, many people are still seduced by the conceit of a story, and I am sometimes among their numbers. Often, the impetus to purchase a book begins with an idea of what the book is about, not an understanding of the author’s style. This is why people like me have piles of books that they have started but are likely never going to get finish.

Sarah Gailey’s American Hippo had one of the most bizarrely wonderful conceits I had heard about in some time. A book, where in a hare-brained scheme by the US government to import hippopotamuses into the American bayou and then butcher them for meat is actually implemented (please note: this really almost happened. It was an actual plan), sounds exactly like the kind of conceit that will get me to put $15 or so down for a book. I would be very much interested in how Gailey’s book explores how this would have played out.

Sarah Gailey did this well. And she too knew that the conceit wasn’t enough. She doesn’t focus on the alternative history of the event, but creates a western like world and populates it with some interesting characters who find themselves int he middle of this world and the problems that it has created. I did find myself a bit confused about some of the characters and their motivations while reading this, but it otherwise remained enjoyable.

On a personal note, the book humbled me a little bit. Reading it, I thought a whole lot about suspension of disbelief. When you read a book, particularly a book in a paraliterary genre, you are often asked to accept a premise. But it often doesn’t always make the premises clear from the beginning. I at first thought of this as alternate history, but as I began to read it I wondered if I was supposed to be imagining a world where hippos were a domesicatable animal. That is a very different suspension of disbelief. I felt it was stretching a little too much when early in the story a character began to brush the teeth of one of the hippos.

As if to call me an idiot, shortly after having this thought I found this video. So I guess I am wrong on that front. At least a little bit. I still wonder how many people took care of their own teeth back then, much less the teeth of their domesticated animals. This felt like it was pushing  up against my suspension of disbelief just a little bit.

And to be even more fair to the book, I don’t think I saw the words ‘Domestication’ or ‘Tame’ in the story, although the word ‘feral’ was fairly important to the plot, and I guess it must be there as a contrast to something. I’ve seen people damn near get into a physical fight over the very issue (mostly with Jared Diamond in mind, and the assumption from ‘Guns, Germs and Steels’ that only some animals are domesticatable) which limits my confidence to even disbelieve that much. But still, hippos are famously aggressive, and some of the interactions with them in this novel seemed a little too friendly. I guess part of the suspension of disbelief for this book is that hippos are a little more inclined to snuggle up against the occasional human.