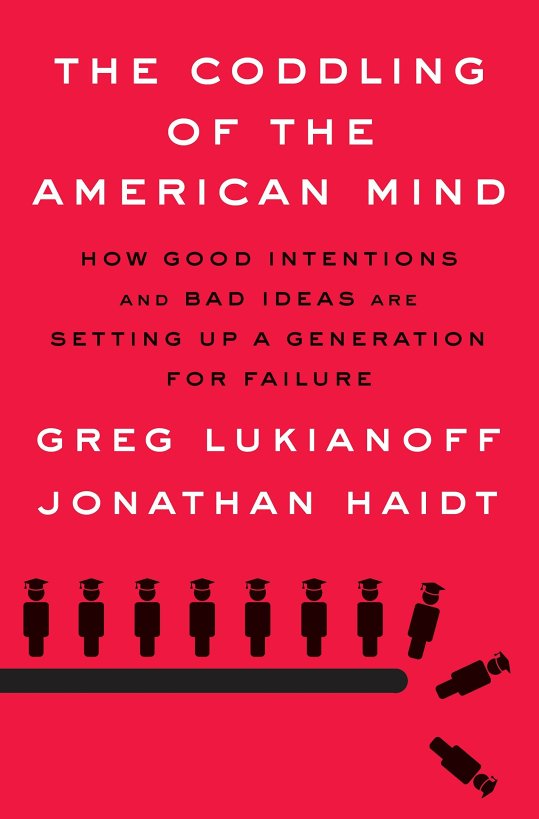 I am easily irritated by those who constantly extol the coming doom of society. It is a very old game, and you can find examples of people in antiquity complaining about how society is doomed and how people, particularly young people, just aren’t the same any more. Like all other end of the world prophecies, they have all failed to manifest. Frequently, it was a new invention that was going to bring about the fall of civilization. Socrates thought it was writing itself that was going to make a world of people unwilling to communicate verbally.

With the advent of the novel, pessimists of the time were convinced that the young would be so enamored of their fictitious worlds that they would then refuse to participate in the real world.

That didn’t happen either.

In The Coddling of the American Mind, the author’s go over the circumstances that, in their view, are creating an incoming generation that is largely unprepared for life as adults. It should be said that the tone of the book is absolutely not one of blaming that generation for what has happened. Rather, it lays them out as victims of something that happened in the society around them. While the causes of what is going on are multiple and difficult to summarize, the authors nominate three principle values that are being taught to the oncoming generation, and they go into detail as to why these values are not only not true, but rather damaging to the students that they are being taught to.

The important question we should be asking ourselves is whether or not this wolf is actually coming. That question will greatly impact how the rest of this book is read. The authors nominate examples of incidents that may be evidence of the problem that they are talking about. If you have been living in America over the past few years, much of it will not be news to you. The fact that a lot of these events did reach public consciousness and there was not a reaction against them suggests that many people may look at the evidence mentioned in this book and assume that the author’s are just crying wolf. It is difficult to say whether these incidences are anything to worry about or just the fear of the authors, but in genuine concern for the people in question, the author’s nominate that the coming generation suffers from higher rates of depression and suicide.

That appears to have happened.