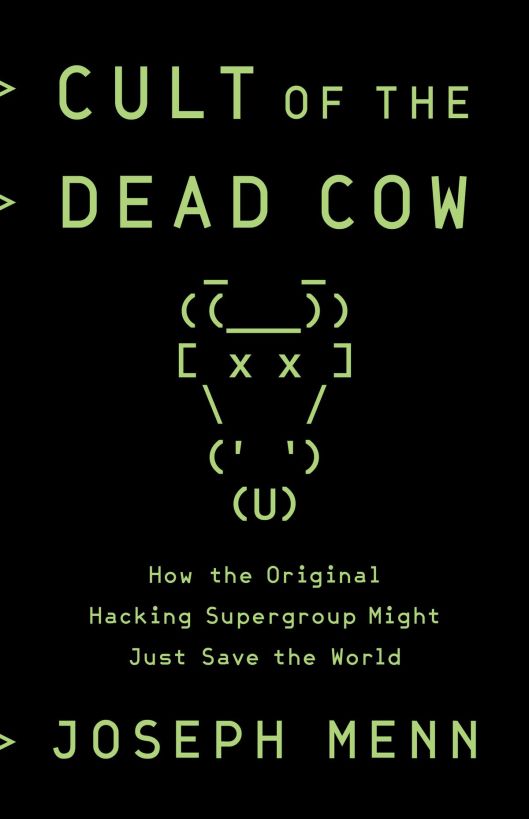 Much of my reading tends to lean on the depressing side of things. It doesn’t help that things seem to be so rundown on the world stage. Every time one reads the news, they find themselves wishing they hadn’t. So to get some optimism in my life, I decided to pick up this book about some hackers.

When one thinks of hackers, they unfortunately tend to think of a hoodie and a darkened room. That meme has dug itself pretty deep, as has the feeling of fear one might experience from the word. It brings up a notion of a person who can control your world (or at least, your technological world) better than you can. It would be foolish to deny that that description is not based in some fact, but the field may actually be a lot more complicated, and the actors in it much more varied.

A case in point is the Cult of the Dead Cow. Joseph Menn’s book follows them from their early beginnings and shows how they’re activities as hackers ultimately blossomed into activism and careers. Yes, they were a group of hackers (who even committed some juvenile crimes) but they are ultimately a group of people working towards some very good goals. The book illustrates how the various members of the group went on to shape how we understand security in the modern internet connected world. That people take things like security vulnerabilities seriously at all seems largely because of them.

What the book is really is the story of how the infosec industry came to be born, the fact that so many people from the CDC had a hand in it seems almost coincidental. Some of you may not know what that has to do with optimism. The infosec industry is largely a lot of people with the ability to do pretty bad things opting to do pretty good things. It to some extent proves the capitalistic idea that if you fulfill certain economic conditions, people will opt to do right over wrong. We are pretty lucky to have that industry around.

The book does have an elephant in the room, and it’s name is Beto O’Rourke, a member of the CDC. The last section of the book does circle around Beto pretty heavily, and I have seen other reviews where people see this as being propagandistic. I am not sure I see this as the case. Beto is certainly a popular candidate, but the book wasn’t being sycophantistic. Beto is merely the member of the CDC who has come to the most prominence in the wider world. It would make sense that the author contacted him, and it seems to fit the personality of Beto to respond positively to such a request.