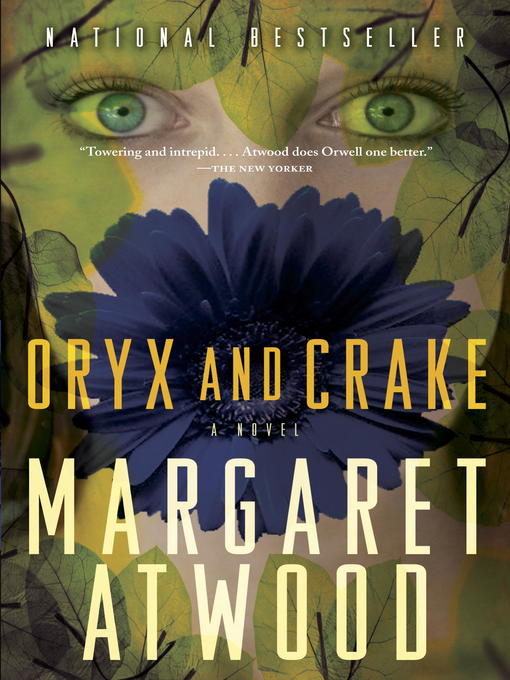 If there is a good measure for the subjective quality of a book, it is probably how long it takes up real estate in your head. I can look at things on my bookshelf that I read not all that long ago, and for the life of me I barely remember the first thing about them. Other come back to haunt you over and over again as you try to put together what exactly it is that happened with the characters, with their actions, and with their world. This effect does tend to bias towards the worst of worlds, and in fact those really terrible places we read about tend to stay with us longer.

Oryx and Crake has been on my mind pretty consistently since I finished reading it. The world it envisions is pretty bleak, but only from an anthropocentric point of view. I tend to see the anthropocentric point of view as the one that matters, so that did make it pretty off putting. The principle setting takes place after some calamity has wiped out humanity, and we see the creatures meant to take our place. The plot of the story is largely flashbacks revealing how we got there, and the protagonists central (albeit passive) role in getting there. The puzzle of the story comes from seeing the two pretty dissimilar things come together; you start off with seeing a humanless future, and then you are taken to a slightly more perverse time in what looks like our not to distant future. Your sympathy for the main character and what he has to witness grows slightly only as you realize that even if he hadn’t been to selfish to realize what was going on around him, he likely would have been pretty powerless to do anything about it.

That’s pretty bleak. But it isn’t so much so that you do not stop to reflect while you are reading it. And, at least for me, those reflections stayed for days.

Writing these reviews is a lot harder when the book is very good then when the book is very bad. This book really typified that, as even those few things I had thought to bring up seemed to be explained away in the long run. It was somewhat frustrating to see the character of Crake being so obviously flawed and still be treated in the writing as a genius. But in the time you conclude that thought, you realize that that was the point all along. Despite his intelligence and despite his confidence, we see him being wrong within the story.

I normally like to space out the time between reading a book and its sequel, but I can see myself getting to the other two books in this series pretty quickly.