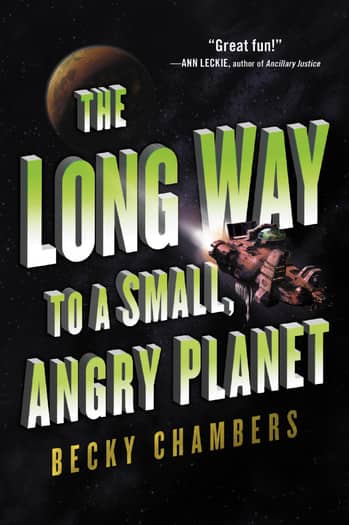 If I had to make a comparison, I would say that writing is most like cooking. Stacking ingredients together isn’t going to make a dish. You have to get the ingredients in the right proportions and you have to follow a certain procedure as well. Not only is it a delicate balance and a difficult process, but there isn’t much agreement on what makes something good or proper in either food or writing. I personally find myself on the liberal side of propriety, but on the stricter side of aesthetics: go ahead and do whatever you like, but I know what I like and what works for me. This is all to really say that we waste a lot of air on what is fundamentally subjective.

And that was a lot of words wasted on beginning an apology for a book I didn’t like.

The Long Way to a Small, Angry Planet is about a space crew. That’s all you really need for a summary. They are given a job today and they set off to do it, but the book mostly explores the relationship they have with each other.

To say nothing much happens is not a valid criticism. In the same way that you could say that about this book, you could just as much say it about Dhalgren, which remains my favorite novel of all time. Truth be told, lots of things happen in both of those novels, but they are small collections of events that seemingly don’t amount to much of a grander picture. Idem for classics such as Naked Lunch.

The nice thing to say about this book would be that it has rich and well developed characters, and largely I can agree with that. However, the route to get there was not always appreciated, and a lot of time I found myself saying ‘this is just cheap exposition to see more of this alien species’. But what was worse is that I for the most part didn’t care. Again, the characters were not poorly written (even the character who displayed cartoonist bubblegum exuberance any time she showed enthusiasm), but there were just no stakes to hold my interest for that long. If maybe just a little more happened i might have cared, but largely I found myself not. For example, close to the beginning of the story we are made some promise that the central character has an intriguing back story, but it turns out to be underwhelming at best. The characters have the proper reaction to it – they don’t care and they don’t understand why the main character ever did. Unfortunately, I also didn’t care. From a story point of view it was a massive let down, and it fumbled all my interest in that character.  I also felt that from a reader’s perspective this failing to build anything felt like a betrayal.  To keep a food analogy going, it would be like dropping the meal you prepared on the floor as you are walking to the table and realizing you’ll now likely have to order in. Towards the end of the story, one of the characters dies, and it deeply impacts another character. Again, from an execution point of view it was fine, but I just didn’t care. Not enough was built up in the story for me to care about these two characters, much less feel their loss.

I haven’t the faintest idea how, but the author managed to telegraph that the protagonist and another character were going to be romantically involved from pretty much their first interaction. When it finally came to pass, it didn’t really scratch the same itch that fulfilling reader’s expectations normally does. Something about it felt terribly cliche, though not because it has been done before in literature, but likely because after reading this much of the book you can see exactly what the author is attempting to do. It kind of felt like heavy handed moralizing.

I am not sure when I started to feel that the title of the book was pretty arbitrary, but a better title might have been Friends, but in Space. That feels like what the author was going for, and I wouldn’t have a problem with than on principle, but something about the execution made it feel like an adult who tries to do a drawing in the style of their toddler, and then puts it up on the fridge. Sure, I guess they went to an angry planet, but the journey didn’t feel all that long. I think it’s because the individual episodes made me lose sight of the overall journey.

Like pineapple on pizza, I have no problem with this, but I will not partake. It’s just not for me.

Oh who am I kidding I am going to read the next one in the series. I am a glutton for punishment.