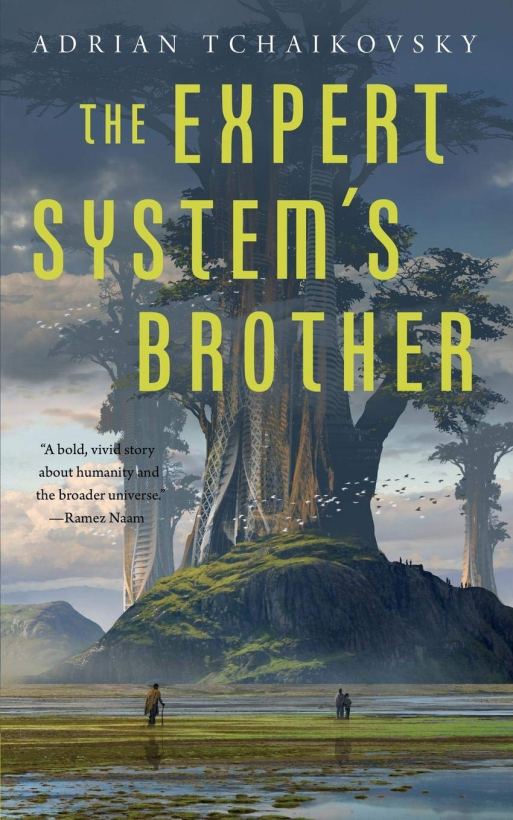 Icebergs, am I right?

People love to go to them as analogies. So little above, so much beneath. I am reasonably sure I first heard about them in analogy to writing fiction in a college Hemingway class. But just enough above so that the reader can know just how much really lies beneath – but make them do the work of figuring it out. Otherwise, you take the sport right out of the reading of fiction.

It’s solid advice. So much so that one wonders who it hasn’t become cliche. These things (cliches) are rather seasonal, aren’t they?

Of course they are.

Like the aforementioned iceberg, sometimes you see something and you know that just beneath the surface it is a cliche, even if you aren’t exactly seeing what it is that makes it thus. That’s just how I felt about The Expert System’s Brother – though before someone thinks this is a negative review, I’ll emphasize the word felt.

I am actually going to forgo a synopsis of the story, because I am not sure I can do gracefully here. What I want to instead call attention to is the setting, which begins in a place that feels very fantasy, and builds us up to a world that is very science-fiction very quickly. That feels chiche, though I couldn’t tell you why1. The title surely didn’t help, as I am sure we have now seen ever permutation of ‘The (such and such)’s wife/daughter/ second cousin twice removed’.

But that being put aside, the story is really only cliche if one squints there eyes. A future that goes so far into ruin that it begins to resemble the past is a sci-fi trope with a long and rich pedigry (Heinlein did, Miller did it, I am sure some others did it too), but the variety this can take is likely limitless. I don’t think they step on each other’s toes.

And I think the fact of the matter is that is what I liked most about the story. And by the time I finished it, I wanted a whole lot more of that. I would have happily taken this story at twice or thrice its current size. I wanted to keep going, I wanted more, I wanted to see the world as it was before, and I wanted to see much more of how the things got to be as they are now. All of that was infinitely fascinating to me. Maybe the truly off thing about cliches is just how much I am anxious to indulge them.

1 This is very mean on my part, but that’s the point. Ages ago, I wrote a short story that a friend offered to read. He said it was ‘fine’ (your first sign that a story isn’t), and after some prying to get him to tell me what I could do better, he told me that he thought the story was cliche, bringing up specific examples. He didn’t actually read much, and I asked him to name me some stories that had similar elements. He couldn’t. Still, he may have been right. And that is just my point – maybe cliche is just a feeling.