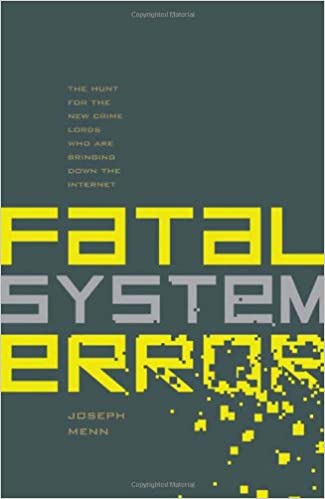 The internet is now ubiquitous. It wasn’t always that way.

I think I am lucky to have been born on the cusp of things, and to remember a time when there was no internet. I also clearly remember the time when everything was changing, and people were either trying to get used to the internet, or struggling for a way to make it work for them. That transition period is fascinating, and I think in the future there will be reams of interesting books about how the world changed during that period.

Those books will feel like Joseph Menn’s Fatal System Error.

This wasn’t all that long ago.

The book specifically talks about how organized crime began to get into the online word through holding online gambling hostage to DDoS (distributed denial of service) attacks. The story is rather complex, and spans the globe as easily the internet itself. It opens to crimes happening in the Caribean against the Italian Mafia in a grey-area market and ends with arrests in Russia via a criminal investigation in the UK. It is very much a globetrotting story.

The book seems to be cleaved in two parts, following two different protagonists working towards the same goal. While it makes sense from a story point of view (they were really going after the same target), I found to be the first one much more interesting than the second. But I did like reading this, as I am generally interested in the topic. We all should be, as cyber crime is headed to become the third largest economy in the world.  Scary stuff, right?

But this is how the world is changing. I lived in an interconnected world when I was born, but it was not interconnected to this degree, and nor was it this obviously interconnected. Economists often talk about our interconnected-ness with optimism, but when  you realize that the person holding your laptop for ransom could be anywhere in the world, you start to doubt the idea a little bit.

I seem to say this every time I read a tech-focused book, but I feel like books like this should be required reading to be culturally literate in the 20th century. I am sure people with expertise in cyber security can skip it, but for everyone else it may be a good primer for what is going on.