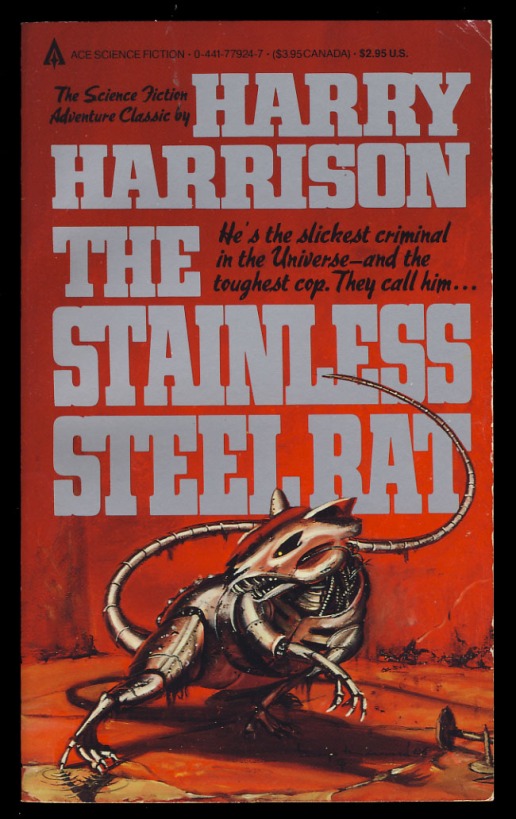 Look, I will eat McDonald’s and I am not ashamed of it. I don’t do it every day, and I recognize it for what it is. Sometimes I want a nice steak, and sometimes I want something that is just cheap and easy. I don’t think that is necessarily a bad thing.

There are book equivalents to this. And Harry Harrison has written one.

The titular Stainless Steel Rat is James DiGriz, an extremely talented criminal who gets pressed into a law enforcement corp. From there what I like to call ‘standard adventure’ ensues, with a little bit of intrigue, a little bit of romance, and a little bit of adventure. From that checklist I just made, nothing is done particularly well, which I can say easily just like I point out the lack of nutrition in McDonald’s. But just like I would retort to someone who brings up McDonald’s lack of nutrition, I would like to remind people that I wasn’t reading for that scope.

There are two ways of looking at this. One the one hand, it probably isn’t a good sign that I found myself apologizing for this book pretty early on. When the main antagonist is introduced, they escape with a very obvious bit of deception. I don’t think it was a matter of telegraphing, it was just poor writing. Later, that same antagonist is given a pretty awful apologia with a REALLY awful bit of misogyny.

And I hate having to apologize for things like that. The book is now 60 years old and in those respects I mentioned above, it really is showing its age. The world has changed a lot since this was written, and in the same way that my grandmother doesn’t understand the modern world, I don’t expect a book to either. A person can change with the times. A book can’t.

But I said that there is another way of looking at this. Wikipedia calls this ‘comic science-fiction’, which is a satirical subgenre of science-fiction. I am not sure I saw that. But the same issue applies from the above paragraph – if this is satire, then it is satire of the state of the genre as it was 60 years ago, and frankly, I really haven’t consumed that media. There is thus a pretty large chance that if this is a satire, it may just be that I can’t see the clues of what it is lampooning. If a smarter person than me does, please let me know.

At the end of the day, I kind of like reading things in a series. This one was not only easy, it was also kind of fast. And sometimes that is what you need. If your hangover is bad enough, McDonald’s will hit the spot more than any bit of fine dining. And I think in six months time or so, I will be more than happy to have another Stainless Steel Rat.