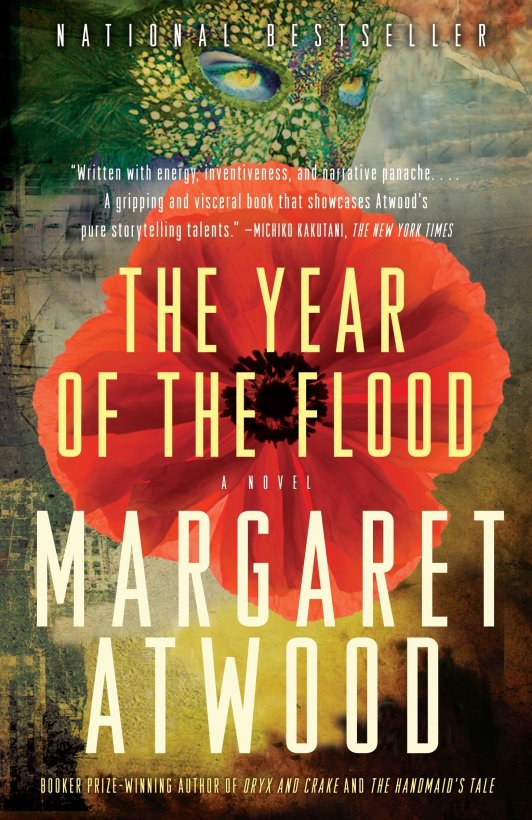 I sometimes don’t like how cynical I am. I think it was a negative aspect of my upbringing. My parents were pretty much skeptical of everything, and predetermined that everything out there was garbage. They would tell you that sequels are garbage, specifically the type of garbage that publishing companies force poor unfortunate writers to pump out sequels to their hard work.

Just to be clear, I don’t believe that. But i did entertain the notion while I was reading this. Yes, I know how harsh that sounds.

I was absolutely over the moon for Margaret Atwood’s Oryx and Crake. I thought it was truly an excellent novel worthy of all the praise that has been heaped upon it. And I was thrilled to know that more was coming. I was well and truly looking forward to this sequel. It would be wrong to say that I did not enjoy The Year of the Flood, it is just that as a sequel, it didn’t seem to follow the parts of the story from Oryx and Crake I found most interesting.

In Oryx and Crake, we (largely) follow the end of civilization from the point of view of someone who closely watches the architect of our doom, and is unable to do anything about it. The Year of the Flood instead follows people who were removed from the center of the action, though their lives did in some way intersect with some of the principal players of the downfall. It gives us a much different perspective not only on the downfall, but the corrupt world that led up to those events. Atwood doesn’t paint a lovely picture of either the world before the titular flood, or the world after it, and that certainly made the story interesting. But frankly, I do not think there was anything much in Toby and Ren’s (the two main characters from The Year of the Flood) stories that would have by necessity be tied to Oryx and Crake. It may as well have been its own story. And that brings me back to the the above cynicism with which I started this review. Part of me can’t help but wonder if someone at some publishing company read this and strong-armed Atwood into tying it into the previous, successful story.

But I couldn’t help but get the impression that all of what we read here was just a different story from Oryx and Crake. Mind you, not a bad one – I read it, and I read it much more willingly than I read many other things recently. But something about it felt tacked on, like it was written in isolation and then stappled to Oryx and Crake‘s framework for lack of a better home. It was thus far too easy for that overly cynical side of me to take over. I think the sermons and the Hymns peppered through the book were a breaking point for me, and I will admit happily to having skipped a few of them.

Frankly, I know from other readings that Margaret Atwood is better than all that. Which is why I will ultimately end up reading MaddAddam shortly.