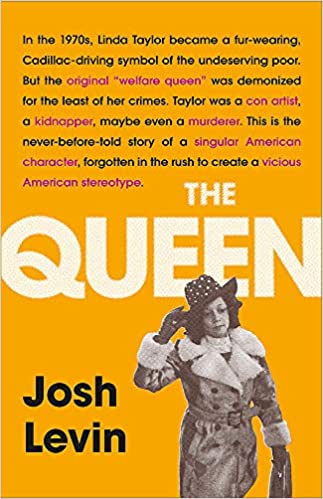 I have been on a bit of a biography/memoir/autobiography kick lately. This was really not my plan at all, and at least five out of six of the books in this genre that you either have or will see me review were gifts. But I have been enjoying it, and more importantly I think it has been affecting my outlook on the world. It has been allowing me to look at the world from the perspective of the mythologizing we all do to create the world around us. In some cases we do it about ourselves, and in other cases we do it about other people.

The later is obviously very much worse.

I feel like the elevator pitch for this book does a certain injustice to it. That pitch goes as follows: “Hey you know how Regan used to talk about Welfare Queens riding around in Cadillacs? Here is the ONE person he was talking about. That person was names Linda Taylor, and stories of her success may have been a bit overblown.” All of that is in the book, but there are actually two other parts to it. The second follows a person mired in a lawsuit about an inheritance, and questions about the legitimacy towards their claim to that inheritance. The question that comes up is, considering that the first third of the book is about the Cadillac Welfare Queen con artist, is whether this is just another con. The final third of the book looks at the last few years of Linda Taylor’s life, after her brief and faint notoriety had died down.

Particularly while reading the first third of the book, I thought it wrong to call this a book about Linda Taylor. It isn’t. Linda Taylor is a part of it, even a large part of it, but she is by no means the whole story. In a strange respect, this book is equally about Ronald Reagan and George Bliss, the journalist who broke and embellished the first story. It seemed strange that the myth of the ‘Welfare Queen’ seems to be as old as the awareness of Linda Taylor’s existence. And that is suspicious in and of itself, because it suggests heavily that a certain sect of right wingers had wanted a person like Linda Taylor to exist before she ever did. The book makes it abundantly clear that it was a myth waiting for a figure to come along and fill its shoes, and this does much to endear Taylor to the reader.

During the whole second part I was leaning towards the notion that Taylor was the rightful heir. From a storytelling point of view, it made sense for Levin to not come right out and tell us. The suspense did keep me going through the rest of the book. But I did feel irritated by it at the time.

If all of the previous makes you feel like what I have just written is some kind of a liberal apologist screed trying post-hoc render innocent Linda Taylor, know that that is not the case. Linda Taylor was a real piece of shit.That much is pretty undeniable. She did a whole lot of bad things in the course of her life. What the book provides is a context for those actions. For as much as this is going to feel like a stupid comparison, but it reminded me of the (early, and therefore good) works of Thomas Harris (of Silence of the Lambs fame). In the thriller Black Sunday, Harris walks you through the psycho-emotional abuse the terrorist suffers before becoming radicalized and planning his terrorist attack. How you then process that is between you and your own battle with notions of determinism, but an understanding of how the world shapes us is indeed fascinating.

Linda Taylor is fascinating. I would read another, long and more detailed, book on her.