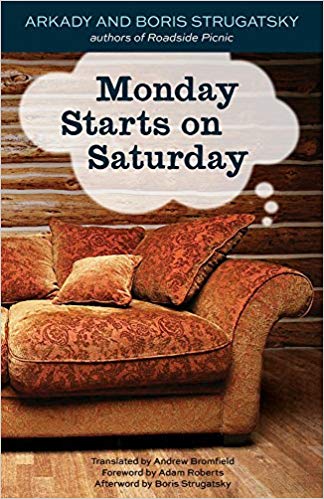 Harry Potter made us all want a little more magic in our lives. I can sympathize with that sentiment, particularly considering how seemingly dull our mundane world can be. But to some extent it would be an error to think that just because the world would be more magical, it would be improved in every respect. The most unrealistic thing about Harry Potter was often not the characters or their actions, but how the institutions within their magical world didn’t seem to suffer from the fatigue of humdrum life.

Yes, I get that that is the point. But surely in that world there are going to be a lot more bureaucratic red tape and inordinately long lines at the post office.

Monday Starts on Saturday is the story of a young computer scientist named Sasha who finds himself at a strange and secretive Soviet research institute named NITWiT, where he is convinced to take residence and employment. There he discovers the existence of certain paranormal creatures and phenomenon, and has certain comical misadventures with the researchers there.

Monday Starts on Saturday has been affectionately called Soviet Hogwarts, but should any accusations pop up it should be noted that this novel was published the year J.K. Rowling was born. However, to call it that is a bit of an unfair description, as the mental image one gets from the word soviet can differ by a wide margin. It is safe to say that the story is very Russian, so much so that you might have to run to wikipedia now and again to see what exactly is being talked about. Normally the naive main character of a story like this would share in the readers ignorance of what is going on. But here one must consider that the original audience was meant to be Russian, and so while the main character was a little confused at what was going on, without knowledge of Russian folklore, I was frequently very confused. But never so much as to detract from my reading.

The story had elements of what I have taken to calling slapstick, or looney-tunes, humor that I really enjoy, and I wish we saw more of in writing. A pretension I cannot seem to fight away from people is the notion that books must be serious (A friend once found me reading a Thomas Pynchon novel and asked me what I though of it. I told him I thought it was very funny, and he looked at me as if I had told him that the President had two heads) in order to be of any worth to anybody. On the contrary, books can be whatever they want and still be very good, even when it involves a group of magical people fighting over a missing sofa.