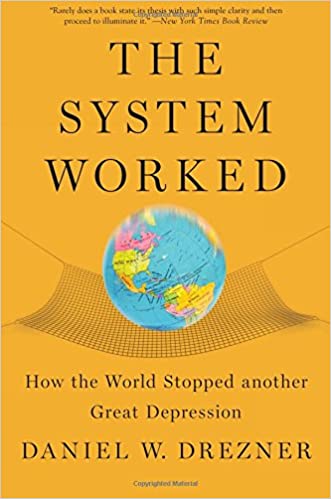 Full disclosure – I didn’t finish reading this book. I don’t even think I came very close to finishing it. So in that respect, this assessment is in no way fair. That being said, I think there is a pretty important, and fairly honest, reason as to why I didn’t, and that is worth recounting here.

When I was younger, I wanted to be as polymathic as possible. I blame my parents, neither of whom were educated enough to really understand that those people who knew everything really didn’t exist. I was raised to think that there were smart people and the rest of us, and smart people had all the answers.

That is not the case. There are people who try and fail to know a little bit about everything. I am of their numbers.

So I won’t pretend that I understood Drezner’s book. Although I think he worked exceptionally hard at making the book accessible to the lay person. I am not sure it reached that mark, but it might be more a fault of the subject matter than the author’s ability. Some things cannot be helped. The author claims to be able to show just to what extent the system worked by the end of the second chapter, and I feel that if he did, the failure to see the proof was my own.

But there is another thing to say about it, and it is that even if he is correct, I am not sure that I believe him.

To be clear, I don’t mean this in any kind of nefarious way. I don’t think the author was disingenuous in any kind of way. From his perspective, I am sure he is 100% correct. But here is the issue – I lived through the crash and I am not sure exactly to what extent life ever got back to the way things were. Yes, I know that many people would say that that is not exactly the point, but the prosperity of my generation has done nothing but go downhill since then. I think there is a pretty strong socio-economic line, and on one side of it the argument that the system worked is just not possible.

If the system worked – what exactly did it work to do? I am sure I have an answer, and I am sure Drezner has an answer. I think the commonalities may stop there.

Someone is probably saying something to the effect that ‘if the system hadn’t been in place, things would surely have been worse than they are.’

Right…. I have an answer for that.

If Drezner doesn’t see what I am getting at with this, I would be happy to mail him a copy of Voltaire’s Candide, but I will address it to the good doctor Pangloss.

If the system did indeed work, then the wrong system was in place.